In 1994, I was living in the mountains of New Mexico and had been making furniture for about five years. I’d already introduced natural oils and earth pigments to the finishing process, and started to incorporate more curvature into the quite traditional lines of the work thus far. Pueblo Cabinet, designed by commission to be a "Southwest-style cabinet," gives a sense of the work at the time, although it was unusual for me to work in a given style.

Soon after completing this piece, a gallery owner from Aspen, Colorado, commissioned a set of five showpieces that would be available for sale, and potentially generate further commissions. This was an extraordinary opportunity for an evolutionary leap in design and creative engagement, besides jumpstarting a new portfolio that would support its unfolding. 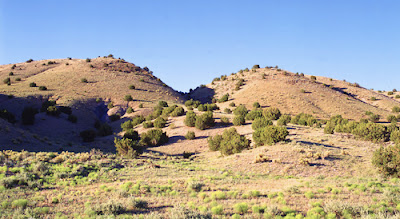 The most essential element in the transformation was shifting the basis of the work from architecture to landscape. This allowed the process of design and creation to embrace my innate affinity for nature. Landscape became the broad field that held the integration of plant and animal forms that would evolve over the next four years.

Architecture remained a key aspect of design—these were structural, function-specific objects, after all—but beyond the pragmatics of function and dimension, the sculptural potential fueled the passion necessary for the intense (and solo) creative effort behind this work. Each piece was both a study of, and hands-on practice in, the creative melding of divine masculine and feminine forces.

A Lean, Well-lighted Place was one of that first set, all of which had bulbous, twine-wrapped segments on the legs, which had started to round on the outside surfaces. Overall, curvature is quite evident, yet there is still a sense of tautness and restraint. The feet had begun to evolve in a hoof-like direction.

Another of the first group was So Close to Texas, the top of which exemplifies two key aspects of the wellspring of this work from the start. The sense of landscape is a wide-open plain here, with a backdrop of mountain/sky and a symbolic sun perched therein. The carved-wood horns allude to both the cattle of the plains, and the overall bulk of the piece.

The other key element energizing the work was a deep, abiding sense of these pieces as celebrations of the sacred within the mundanity of daily life. This was explicitly expressed in the horns framing an altar space, which is raised above the larger expanse.

When I’d returned from delivering the work to Aspen, I dove right into Mountains in Her Belly, the proportions of which were roughly based on an antique washstand. The towel bars that would traditionally extend from the sides of the top have been swept up and back in the form of horns, framing the altar as with So Close to Texas, but in a leaner manner. There’s a drawer in the front, which opens by way of a lip on the bottom edge. The leaf-like “mountains” in the lower area introduced the integration of land and plant forms that would continue to evolve throughout the series.

Those leaf-like mountains spread horizontally in Woman Sitting Garden. Numerous new elements entered the Treebone Garden palette with this piece, including the inspiration for its name. The feminine claimed her power with this one, imbuing the work with a voluptuous sensuality. Animal joined land and plant more fully in the integration of forms, and brought that sensuality right to the edge of sexuality with stylized female genitalia just under the front edge of the sitting surface.

“Pillowing” the edges of meeting surfaces became a regular part of the style, mimicking the tendency of plant forms to bulge and then recede slightly where one part joins another.

The layers of planes in the underneath area of Woman Sitting Garden inspired the play of waves in the valence of River Runs Through. I see the piece as being rather deer-like. The top is leaf-shaped, and the fine taper on its outer edges was possible due to its being made from walnut wood. All the prior pieces were made of red alder. All the joints in this piece had to be custom-cut, as there are no right angles to simply set the tools to.
Beloved was a small series in itself, and this was one of the earlier ones made in walnut.

Treebone Garden is actually an umbrella term for a group of interrelated explorations along a continuous path of discovery. The Rio Yoni style would appear every now then as if waiting in the wings for another opportunity to appear. Rio Yoni Dresser introduced sensual, lip-like surfaces on the sides of the drawers in lieu of knobs or pulls. The piece has a rather raw, primitive feel to it, in contrast to many of the later ones.

Rio Yoni Cabinet was designed for a stereo and large television, and was quite large (84"H x 60W x 36D). All the curved seams are free-floating, i.e. the panels are only attached at the tops and bottoms. Copper handles accompany a more refined look than its sibling Rio Yoni Dresser.


The breakfast table Jonny Bo Font has an animal sensibility combined with a leaf- or fish-shaped top. At a furniture show in Santa Fe, New Mexico, a woman approached my booth and just stared at the table, smiling. She looked my way and said, “My husband, who’s a real cowboy—not some wannabe, but a real cowboy—saw this yesterday and came home and said, ‘Honey, I saw a table today that was alive!’ I just had to come see that table...”

The upper image doesn’t show it clearly, but in the center of the bronze-green top, there’s a silver blue “pond”—a slight indentation in the broader landscape. I’d put some water in it, and the bubble would seem to float.


The Southwestern desert landscape had a deep influence on the aesthetic of Treebone Garden, so when a designer approached me about a set of three pieces for a home on the California coast, I saw it as an opportunity to encompass a more oceanic feel as well.
Placed just over a small dune from the beach in a cottage-like room, Pacificus naturally incorporates a cool, watery, dreamy look that melds landscape with just enough architecture to support the massive, king-sized mattresses.
A cooler, more watery palette was used as well on the commode, Box That Loved a Clam, and mirror, Mirari Pacificum, which incorporates elements of the seascape: kelp, palm trees and a seabird egg.

A middle-aged woman commissioned this desk, saying it was the long-awaited time in her life to focus on writing, and she wanted a secretary-style “woman’s desk.”

The recess in the top shelf of Her Writing Desk, as well as the front edge of the writing surface, provides a sense of receptivity—as if one is being invited into the writing space.

The dip at the top of the overlapping leaves on the front, combined with that recess, allows one to see a bit inside, creating a feeling of intimacy with the hidden space. She could finish her writing, and simply close the front to create a refuge for her thoughts.

A long drawer pulls out from the side, accessible whether the writing surface is open or closed. 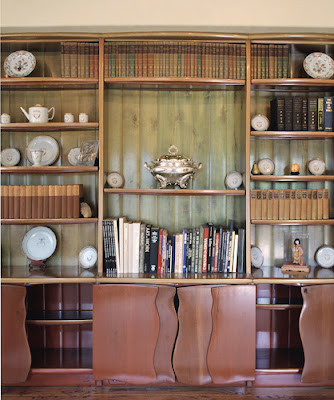 Brookecase was a several-month project comprising about 250 parts. At every opportunity to break away from straight lines, I invited in curvature of various sorts. There are no knobs or pulls, but lip-edged gaps one must enter to open the doors. No latches, either: the top of the cabinet unit is recessed slightly, so past the mid-point, the doors close on their own against felt pads. They create a play of negative and positive space when left open. 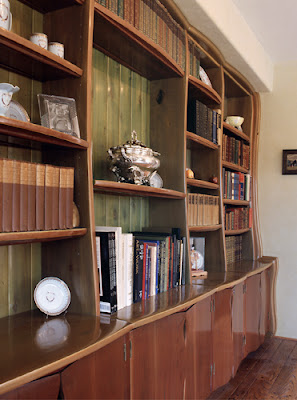 The walnut doors were left out in the desert sun to warp leaf-like before finishing. Aspen wood tongue-and-groove back, poplar uprights, alder shelves.

A later design stream under the Treebone Garden umbrella was Nuvo Art Nouveau. I’d always been drawn to the feminine, nature-oriented quality of Art Nouveau design, but found its frilliness a bit much. Without intending to create a more modern version, the work naturally evolved into just that. 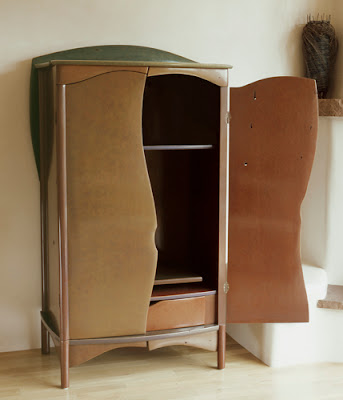 Gone are the overt animal qualities, as the pieces seem to relax into a more generalized expression of nature meeting architecture. With the back of the pieces still wider, though, they’ve quietly retained a look of an animal sitting on its haunches. By this time, the finishes had become an art in themselves. Like the earlier pieces, the fleshy, liquid surfaces are interrupted here and there by raw knotholes, reminding one that the material is, after all, wood.

Nuvo Armoire is a television and stereo cabinet, with a swiveling, pull-out platform. As with Brookecase, the doors play with negative and positive space. The finish has a subtly metallic quality of bronze and brass. 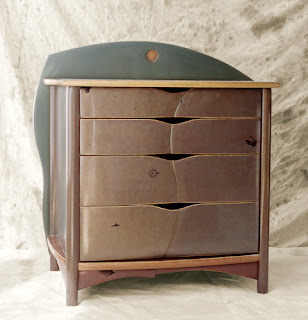 While all the Treebone Garden pieces have an androgynous appearance to me, the Nuvo Art Nouveau series seems especially so—its feminine, serpentine lines lending expansiveness and expression to the masculine straight lines and structure. Nuvo Dresser pares the mergence of land, plant, animal, and architecture to the essence with its dance of stillness continually erupting into gesture.

Most of the Treebone Garden pieces were commissioned, so it was fitting that the final furniture work was as well. Fitting, too, that these pieces pretty well covered the span of the four-year-long series. 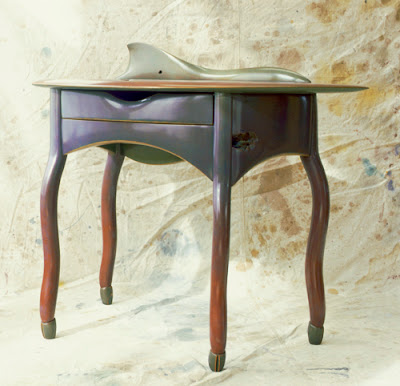 Ocean Swims Through was requested by a woman who loved the image of River Runs Through in the portfolio, but wanted a pair of nightstands for her twin sons. For this pair of mirrored tables, I added to that earlier piece a fin that alluded to leaf and landscape, the tip-toed hooves of the mid-series tables, and the refined finish of the latest work.

This fin element has since evolved right through to the current Skyhull series.


She also wanted a low dresser. Nuvo Commode combined the Rio Yoni style front with the lean simplicity of the Nuvo Art Nouveau. It was most satisfying to let go of this work while feeling both the arc its span, and the joy of discovery with each piece.

There was one other final piece, which foreshadowed the new direction of the work. Madam Raptor had started out as a small two-door cabinet on tall legs, but evolved into a sculpture energized by a deep sense of the empowered feminine. She refused to be so easily opened; what would have been doors became mounted sides of a pincer-like opening that allowed viewing of the nest inside, but it remained out of reach. At over two meters in height, she had a formidable stance. Looking back now, I can’t help but see the Lumenhorse work already emerging.